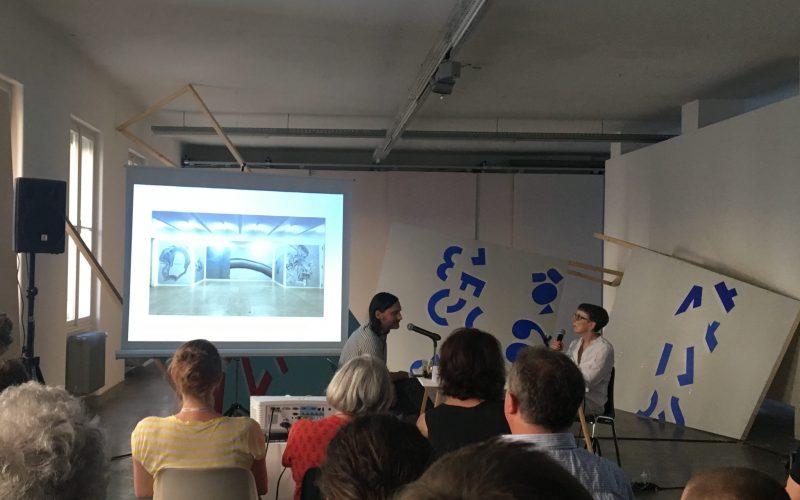 Painting the Idea Out of the Canvas

Yesterday evening, Austrian painter Tobias Pils—who is teaching a painting and drawing class at the academy this summer—and Hildegund Amanshauser, the academy’s director, held a conversation at Galerie 5020 marking the first in a series of artist talks in the 2019 Summer Academy’s public program. The painter, known for black-and-white abstractions rendered in gestural, loose brushstrokes, spoke about his work processes, the art market, and how the demands of these two aspects of his practice and career converge.

One of the main points Pils made regarding his personal work process was the notion that ideally, a painting is complete once he has managed to “paint the idea out of the canvas.” (The talk was in German, so the original quote is “…die Idee aus dem Bild herausmalen.”) Artists, and especially painters, often speak of how the artwork lets you know when it’s finished, when you no longer need to approach it brush in hand. But Pils’s observation is slightly more specific: the canvas doesn’t only tell you when, but also why it is done.

Though both the why and the when can be equally subjective, I feel like Pils’s way of describing this sense of fulfillment puts a fuller degree of agency back within the artist’s vision. Once a certain concept has been worked out “in a language that cannot be replaced by any other,” as he put it (“eine Sprache zu entwickeln, die durch keine andere zu ersetzen ist,”) he, as an artist, can move on. With this statement, Pils points to a nuance, a semantic designation that makes a huge difference. Importantly, it demystifies the (very individual) notion of completion of a creative idea. I’m certainly going to approach this distinction in conversations with artists from now on.