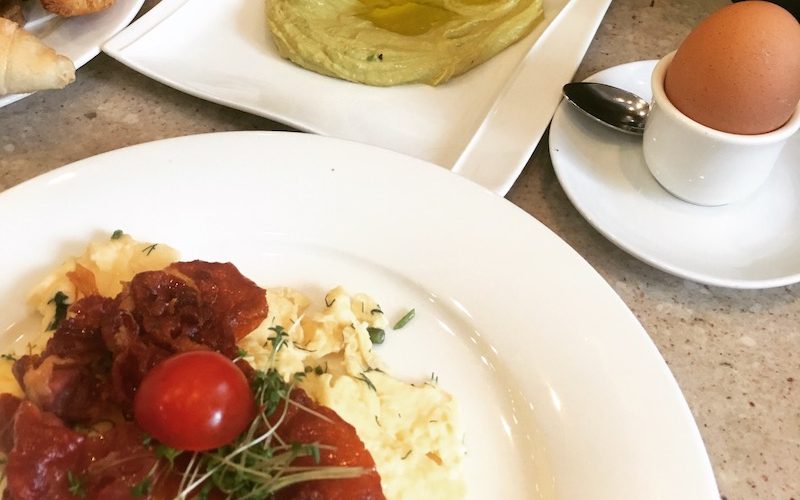 This weekend I had some visitors from Berlin and spent much of my first weekend on a culinary tour of Salzburg. We ate Kaspressknödel (great) and undercooked veggie pastries (not so great) from the Grünmarkt on Saturday afternoon, Spinatknödel with brown butter at a restaurant on Saturday evening and eggs from a nearby cafe when we were rained in on Sunday. There was, of course, a liberal helping of wine with these meals, which – as I kept telling anyone who would listen – was much better in quality than what you get in Germany for the same price.

Other than that, I did a lot reading. I’ve been invited to contribute to Montez Press’ Radio Residency at Mathew Gallery in New York this summer, and I’m working on a series of conversations about books. For the first episode I read and prepared talking points on Crudo by the British writer and critic Olivia Laing and After Kathy Acker by the American writer and filmmaker Chris Kraus. Both books focus on the legendary punk writer Kathy Acker and take place mainly between the cities she lived in: San Diego, San Francisco, New York and London.

It seems strange to be reading tales of these fast-paced cities as I sit in my room in Salzburg – a city that, for the most part, trades in on something that happened in 1756. It makes me homesick for a place I have lived (London) and one I haven’t (New York). Even weirder, it makes me nostalgic for a time, in this city I’ve never lived in, before I was born. New York in the ’70s is a place I’ve only seen in photographs and read about in essays and novels, but I’m drawn to it because I find it so satisfying that the artistic community was still so small and international travel was still so expensive that it was possible to directly trace where influences came from. A historian (or a biographer in this case) can pinpoint exactly when and where a writer accounted a book by Georges Bataille, for example; they know who gave it to the writer and, though letters, what he or she thought about it. Today, our globalised world (at least from a Western perspective) is much faster and more intertwined and our influences are many and far-reaching. The critic Jörg Heiser has labeled this phenomenon ‘super-hybridity’. He writes: “Thus, ‘super-hybridity’: ‘super’ not because it’s superior, but as a reflection of how hybridization has moved beyond the point where it’s about a fixed set of cultural genealogies and instead has turned into a kind of computational aggregate of multiple influences and sources.”

What this means in actuality is that I can sit in Salzburg and listen to friends on the radio in New York, alongside my other friends from Berlin (via California), while writing a blog post accessible to all of you, and it’s completely normal, mundane even.