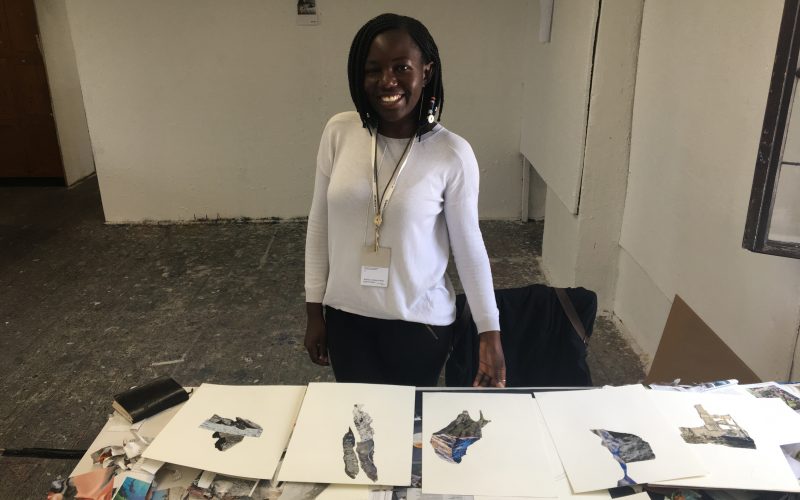 This spring, the Summer Academy’s Society of Friends initiated a new grant in honor of Bisi Silva, who was the founding director of the CCA Lagos, Nigeria, and a central figure in the contemporary African art community, and who succumbed to illness, far too soon, in January 2019.

Silva had originally initiated the co-operation with the Summer Academy that has been in place since 2012, with an award that facilitates the participation of students from African countries. Now, a new grant furthers this legacy.

I sat down with the first recipients of the Bisi Silva grant, Kenyan artist Jess Atieno, who’s taking Jakob Kolding’s collage class, to find out about her work and trajectory, and what exciting things lie ahead.

What was your connection to Bisi Silva?

In 2016, I attended Asiko Art School, a part-workshop, part-residency school that roams around different parts of Africa each year. It’s very intensive, like getting an MfA in six weeks! It was formed by Bisi, and that’s where I met her. She became a mentor, and she developed this network of people and always kept in touch with everyone. We would have these discussions, she’d always want to know what are you thinking about, and make you present all the time. She was really critical and provided important insights, and was pivotal to my practice in many ways. She connected me to so many other opportunities. That’s also how I came here.

Tell me about your art practice—what mediums do you work with?

I’m from Nairobi, where I work full time as an artist with a studio practice. I started in 2015 with painting but moved on as my ideas and intentions changed. I experimented with other mediums: drawing, installation, prints… It keeps on changing and evolving with interest, but it’s organic, I never actively choose to work with a specific medium. Other than when I’ve decided to stop painting. That was the only time I was deliberate.

Why did you actively decide to stop painting?

I just felt unchallenged, and that I needed to do something more experimental. I’m still looking for that place where I feel like, now this is where I want to be, and I’m still exploring so many mediums, but painting, for me, just felt too bland. Also, I hate colors! [laughs] I was creating work and not liking it.  So I made that decision to stop and push myself and see what comes out.

Is this the reason why you enrolled in Jakob Kolding’s collage class here?

I chose the class because I think everything is centered on collage. You’re constantly constructing images as an artist. It’s the foundation to so many other things, whether you’re painting or making time-based media, it’s layering images. So I wanted to challenge myself. Also because I’m not much of a collagist. I’ve never solely focused on this medium and the extended definition of what it is.

So you’re really fresh to the medium. How did you prepare for the two-week seminar?

I came as a child! With child-like wonder. It was very exciting, especially looking at Jakob’s work and what he’s done with dioramas, and seeing, Oh, also this is collage! I had a very traditional image of what collage is. When I saw what he’s doing I thought, people are actually pushing the medium. And not being rigid also helps me. I can exercise my thoughts and find how my work intersects and adjusts with everything we’ve been learning.

It was challenging at first because I didn’t come with collected images, I didn’t have an archive of images. Whatever collages I’ve done in the past were done with found images that I just cut out and pasted, I never scanned anything, I just use that one image one time and it’s over. But with the discussions and presentations your mind starts setting things in motion and realized, I can do this.

Right now we’re focused on the exhibition, and I’ve got the language to describe it and talk about constructed images. You learn as much from interactions with other students as from the teacher.

What will you be showing at the open studios event on Friday?

It’s a constellation of alternate ideas of outer space. I do want to focus on the idea that everyone has alternate thoughts on space, everyone thinks of planets differently. It’s a series of different constellations pushed together. For a title, I was thinking of Sun Ra, I’m inspired by his exploratory music, which is a soundscape in itself and it takes you into different emotions and feelings. But another artist in class used it in their title so I thought of the name Sudden Adventures in Plural Spaces.

What’s next for you, after the Summer Academy?

I’m starting my MfA at the School of the Art Institute in Chicago next month. I can actually trace this back to Bisi, too. When I was on a residency in Chicago in 2018, on her recommendation, I decided to take the tour of the school and campus and get in touch with faculty. I applied and got in! I would have never gone there if it weren’t for her. I’ve been extremely lucky and I’m extremely excited that I get to be part of this. 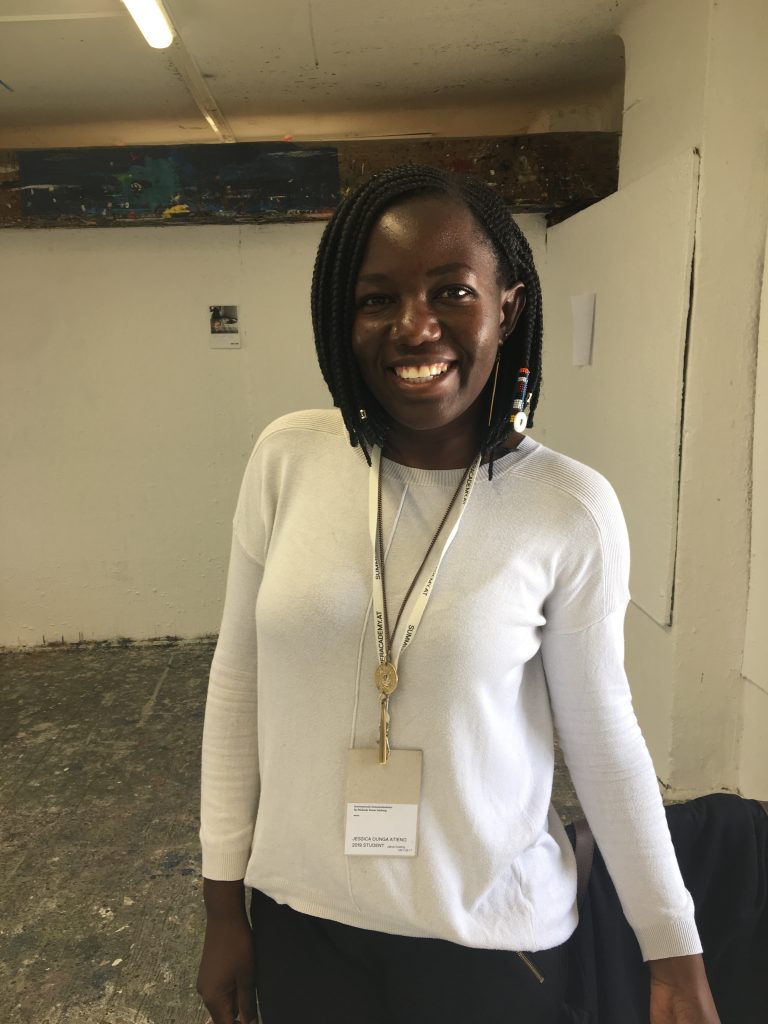 You’re also showing new work at the upcoming Lagos Biennial in October, where you were an artist in residence. What did you produce there?

It was a one-month residency in collaboration with Arthouse Lagos. It was so short… But I’m also an installation artist so it wasn’t as hard to think of something to do with a bigger space. Actually, Bisi recommended me to the biennial curator, and the founder of the biennial is a former Asiko student, so there are all these networks of Bisi’s people! A lot of what she did, the collaborations and connections, are things you get to see as you go along as an artist.

And it’s a first for me, I’ve never done work that’s this big. It’s an exploration on how space moves us and how we inhabit a space. That subtlety interests me. I enjoy subtleties. Initially, my work was about making bold statements but now I’m coming back to myself and I feel like I enjoy quite explorations. I think most of the time I make work for myself and not other people. And my work in Lagos will be like that.