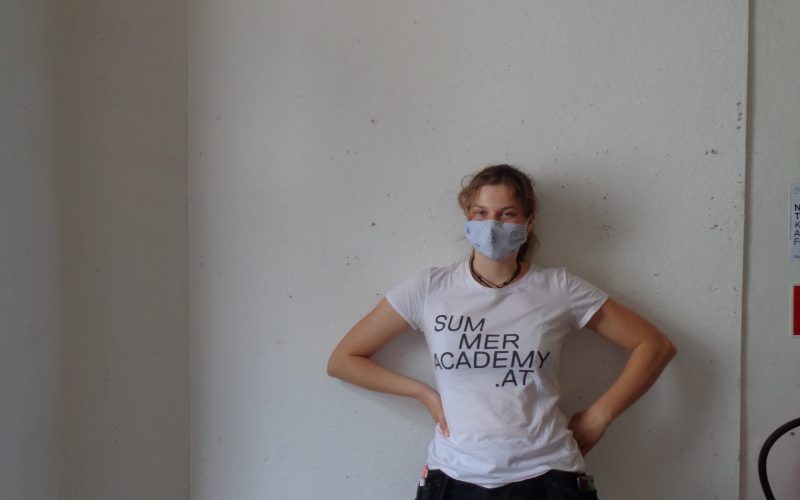 Closeness is only really close in the distance, that’s the first sentence that comes to mind when you look down from the fortress on Salzburg. The fortress, the ship, the assertion visible from every point in Salzburg, like a mother hen enthroned on her clutch, what is looking at me now? Up here? A reproachful look, an offended, humiliated look? A helpless, bumbling one? An endless gaze, like the view of the fantastic Heizkraftwerk Mitte (thermal power station), a brutalistic monument of pure beauty in the centre of the city, like a finger of reality, that one should sleep no more, one should not rest, it’s here where the action is. You don’t ask, you are fulfilled, and yet never fulfilled, that is the claim of never-ending happiness, and happiness is being forced upon you, look, you idiot, don’t you get it? And then one day you grasp what happiness is. Especially when it’s immovable and not running away.

The fortress and the thermal power station return the stare, I look, they look, and I ask: Who am I, that I’m afraid of you, that you intimidate me, that I turn my smallness into arrogance, anger, disgust, awe, subservience, speechlessness, amazement, that I have that reflex of defensive fatigue?

In 1982, Scottish singer Edwyn Collins issued the slogan “Rip it up and start again”, if you fall down, just laugh, and that’s the only way you can win, show your wounds, SIMPLE THINKING instead of just THINKING.

Reflect your thinking, be free to destroy it, destroy every new idea, and just keep thinking. Don’t fall into the trap of the seductive offers “Thinking is praying to Satan”, the guys are standing on every corner singing: “We’re not afraid anymore, we just don’t think anymore”, and put their plastic hosts on your numb tongue.

David Lynch looks down from the fortress, he says he feels like a big rabbit, he wonders what he is doing here, who is the rabbit for whom, and then he asks me 3 questions:

1. Do you have a sense of humor when you’re alone?

2. Are you sick when nobody is with you?

3. Do you breathe when no one is listening?

I sigh in response to each of his questions, and for him this answer is enough. We are meeting Jana Hammer. Jana is from the summer school technical staff team. In the class of Tony Schmale and Noele Ody the kiln has died, a student wanted to bake, melt, transform two beer bottles at 1400 degrees Celsius, for whatever reason, maybe just because of the phase transition, the solid into the fluid into the strange, the idea, you can’t grasp it anyway, you don’t have to, the idea is stuck in the solidification. I say, leave it as it is, every body is animated, the spirit of animism, every body has its value, every bottle its deposit value, here in the exhausted kiln there are perhaps two times 8 eurocents. That is the value of life and the fragility of life. 1400 degrees may not have been able to melt this life, because the idea may have been too weak, leave everything as an idea, in the old, tired kiln, hoping that next week no one will ask why it simply gave up, no longer felt like it.

And Jana Hammer nods. She understands me.

Only by failure the idea becomes an idea, before it was an all absorbing sponge in the foreign galaxy of our subconscious from which we can squeeze nothing. Mankind is two bottles of beer, which cannot be melted, still with a deposit on them. David Lynch congratulates Jana Hammer for all this, for her magnificent name, the broken kiln, the small and the big, 8 cents and 1400 degrees, what is in between? Everything. Us. Nothing.

The endless view of the fortress, on us up here, ultra heat treated by someone, because he or she finds it interesting, and you think: is this the way it is, does it have to be like that, or should I just move on? You can’t embrace or inhale the memory, you can’t hold on to an idea because parasites eat, absorb, adapt and re-label the idea, so the sexiest moment is just the thought, the idea, not the fulfillment, it sounds banal because it is banal. The nothing is not nothing, it is something precisely because the something sounds hollow without the nothing.