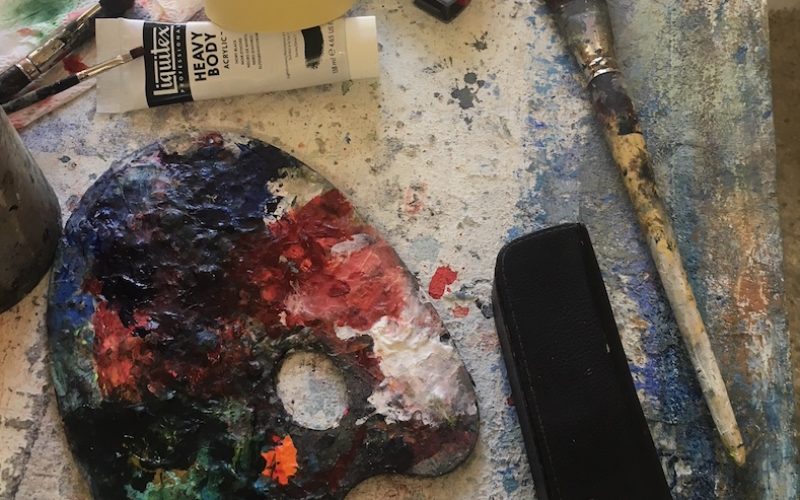 Despite staying up a little late at the fortress last night drinking whiskey, I still made it to Mark van Yetter’s class, ‘Form as Foundation’, at 10AM to sit in on some of the student presentations. There had already been a lot of activity in the studio: unfinished paintings seemed to be covering most of the available wall space and easels were dotted about the floor.

I studied in a sculpture and media class when I was doing my Masters degree in Hamburg and our studios were always very clean and often looked uninhabited because people mostly worked from their computers. I remember one professor who taught on the Grundjahr (the one year of preparation you do in German art schools before applying to a regular class) coming by and asking if he could show his students around. As he left he told them, “This isn’t usually what a sculpture studio looks like.” I bring this up to explain why there is still a kind of thrill for me to be in these messy, paint-splattered spaces. I also really like to hear painters talking about their process because so often they have differing concerns to, say, sculptors or video artist and it changes the way they talk about art. I remember sitting with a bunch of painter friends from my university and listening to them talk about an exhibition we’d just seen of Philip Guston’s work. One of them said, “And did you see the way he used just a touch of green to bring out the red?” and it was totally alien language to me.

What was pretty cool about today, then, was that I got to hear my friend Miles (we were once in a show together in Vienna) introduce both his sculptures and his paintings. He’s been painting for around two years in comparison to the eight years he’s being making art, and I got the impression that he sees the two sides of his practice as very different. I won’t rehash the whole talk here but I just wanted to share some of his musings: “Painting is a window – it takes you to a place… sculpture is everything you can’t contain in an image… I see no reason to make a sculpture if you can capture it in an image.”

On my way to lunch, I bumped into Yorgos who told me about the performance that he did together with his students this week. I did try to go, but made the mistake of leaving the house with only a partial address and no internet and so I couldn’t find them. It sounded really fun though. They had a flea-market stall where everyone sold artworks they’d made for the occasion (buyers got a proper certificate of authenticity) and they also showed a model Kunsthalle in which they staged a new show every 30 minutes.