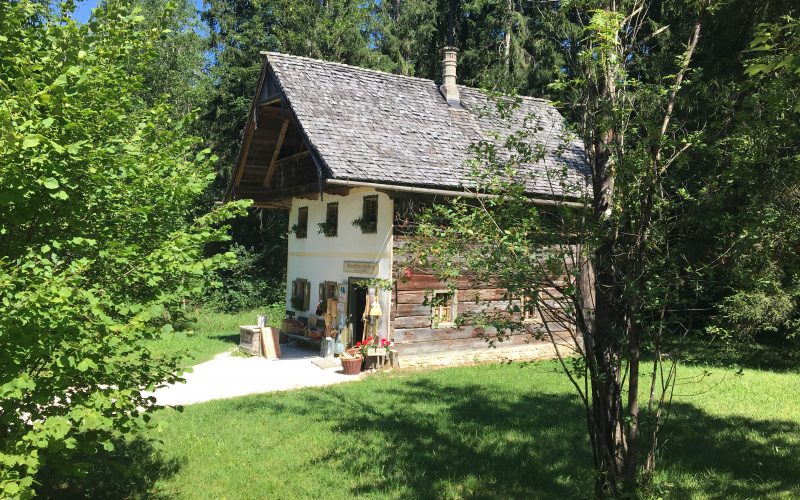 On Wednesday and Thursday, I joined the curating class taught by Marina Fokidis and co-organized by Juliane Bischoff. The course’s framework is defined by the concept of “site-sensitivity”, i.e. getting a grasp on the local conditions and histories before attempting to organize a show or, as the class now refers to it, write an exhibition score. Of course, “understanding” a place is a huge undertaking that requires some streamlining, and Marina cleverly chose to unpack the film so closely associated with Salzburg, The Sound of Music, as a focus point. The 1965 Hollywood film came to symbolize Salzburg for so many fans around the world, that the city now has Sound of Music tours and attractions. In fact, the film attracts more tourism to the city than its famed music and theater festival, the Salzburger Festspiele. “The Hills Are Alive With The Sound Of Music,” a slogan boasts, but the story is much more complicated, as we’ve learned over the last few days…

It goes without saying that in order to attain some degree of site sensitivity toward a place, it is necessary to collaborate with locals. And that’s exactly what the class did in the first week. I joined their meeting with ethnologist Ulrike Kammerhofer-Aggermann, who helmed the Salzburg institute for ethnology for more than three decades, and who penned “The Sound of Music, Between Myth and Marketing,” (available only in German), a critical history of the work and its reception.

As a setting for her lecture, Ulrike wisely suggested to meet at the Freilicht Museum, the Salzburg Open-Air Museum, which is in itself a sort of construct of what “authentic” Alpine and Austrian traditional living used to look like. We sat inside a 19th-century wooden school building and listened to her fascinating talk. 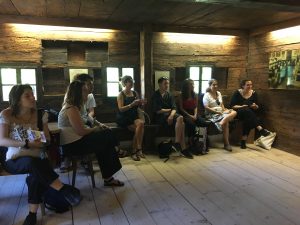 It was interesting to learn that the film was based on the (fictionalized and idealized) autobiography of the nanny, Maria von Trapp, and the two Austrian film adaptations that ensued in the 1950s, as well as a musical. In her book, Maria changed key facts about her life in order to align herself with whatever the political and social conventions were at the time, shifting between religious and idealogical sentiments with ease in order to construct an optimized narrative. (She was never a nun, for example, but through changing this fact she became a role model to some, and a symbol of Catholic Motherhood.) The film also tremendously advanced the self-mythology of Austria as a country with a rich musical tradition, as well as a victim of the Nazi regime.

Ulrike went on to unpack how the term “imaginary geography”—the constructed feeling of knowing a place through its media portrayal without ever having been there—relates to Salzburg in this context. But she also explained how many of the local cultural signifiers, from the traditional garb to folk music, are in fact fabricated inventions often thought up by the Nazis. Separating fact from fiction inside the eery setting of a museum of collected old houses from across the region, transported or re-assembled here, is surely an experience that will stay with everyone. 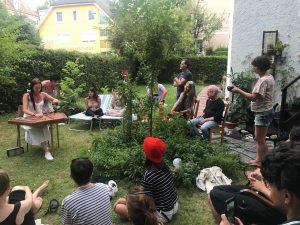 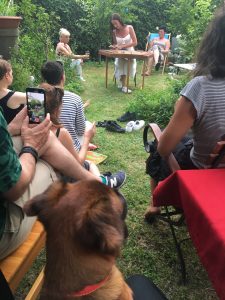 The following afternoon, the group met with filmmaker and musician Sina Moser, a well-known figure in Salzburg’s creative community. We braved the sweltering streets and followed her on a tour of the city’s best spots, as told from her perspective. We also encountered a peaceful pro-choice demonstration, where a handful of young men and women were circled by dozens of police officers. It was a counter demonstration to the sadly much bigger anti-abortion march that took place in Salzburg that afternoon.

At the end of the tour, we were invited to Sina’s home, where a special treat awaited. Sina’s generosity and hospitality seemed endless as she hosted all of us in her garden with drinks, BBQ, and her signature potato salad. She invited many of her musician friends and collaborators to devise a special evening of performances and screenings. The element of suspension and mystery as to what would happen next was maintained throughout the night, and culminated in an intimate concert that meandered through the rooms of her apartment.

Can you think of a more rewarding way to deepen your site-sensitivity?