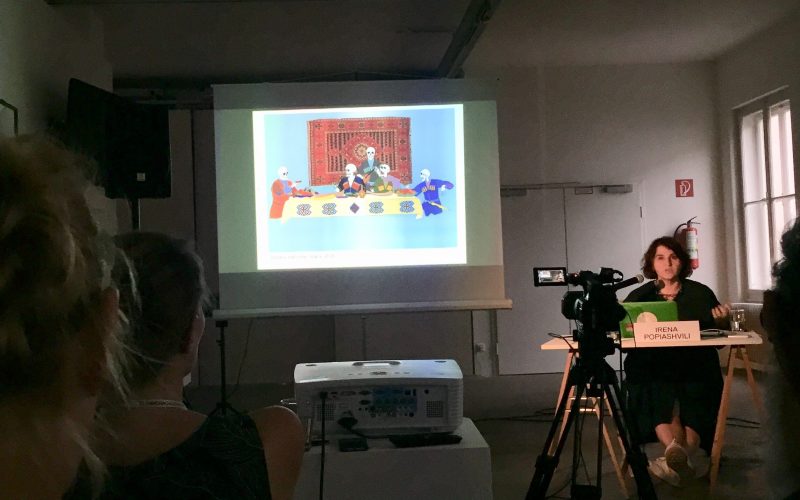 The moment Irena Popiashvili, the dean and founder of Visual Arts, Architecture & Design School at the Free University of Tbilisi speaks into the mike as part of the Galerie 5020 Global/ Planetary Academy lecture series in the frame of the Summer Academy, she makes the Georgian art scene visible with passion and verve.

She relates her experiences with the wide-spread unawareness of the richness of Georgian contemporary art. Stalin’s birthplace rings a bell, the site of Medea and the Argonauts (Kolkheti) and if you are a foodie, you know its cheese-bread Khatchapuri. Also, Georgia was last year’s special guest at the Frankfurt Book Fair and is sometimes likened to a new Berlin in the old sense of Berlin. But just how there is more to Salzburg than Mozart, there is more to Georgia than its cultural stereotypes.

Through the prism of Niko Pirosmani, Irena Popiashvili takes us on a journey through the contemporary Georgian art world. Unfortunately, eurocentric eyes often only understand something new through a mainstream comparison. Pirosmani’s naive painting is the Henri Rousseau of Georgia. Similar in pop culture and heritage oversaturation to Warhol’s Cambell soup, many artists such as Kiki Smith or Yoshitomo Nara made art in homage to Pirosmani. Most famously Pirosmani fell in love with an actress named Margarita. As a true starving artist, he sold all of his worldly possessions to buy her flowers. The definition of struggling artist, Pirosmani died of starvation but his love and artwork are still referenced and traded postmortem. He has become a kind of international icon for Georgia. Most recently Niko Pirosmani was at the Albertina Museum in Vienna, Austria and the Van Gogh Foundation in Arles, France.
A former colony of Russia, wrestling with Soviet ghosts and a relationship to art that has a history in propaganda, a new generation of post post-Soviet artists are defining contemporary art and discourse. For example, Salome Jokhadze pointedly distills her cultural heritage into digital drawings. In Supra (2018), the supra, a traditional feast where people come together for food and exchange, is depicted. However, the guests at the dinner party are toasting skeletons. In the background, a large carpet hangs with a hypnotic pattern. The familiar image seems to articulate a challenge to the viewer. Nika Kutateladze works with installations and architectural materials like installing an entire water mill from a village or folded green grass turf, and a shredded playground inside of a typical soviet apartment or the Kunsthalle Tbilisi. Their voices are fresh, poignant, and critical.

These contemporary developments can be found in the art education sector as well. Popiashvili describes how students at the Free University of Tbilisi are taught law and economics next to art and how they are equipped to take their works onto the international art market. In addition, it is also a feat  to convince Georgian parents that it is possible to make a living in the arts to assure their kid will not end up like Pirosmani’s plight. The art school of  thought is fashioning its new and own discourse beyond and in conversation with “Western” critical theory.

The end of the talk is marked by an awed silence, signaling a respect and appreciation for Georgian contemporary art practices. Clearly no longer underdogs, this transnational encounter successfully bulldozed preconceptions.