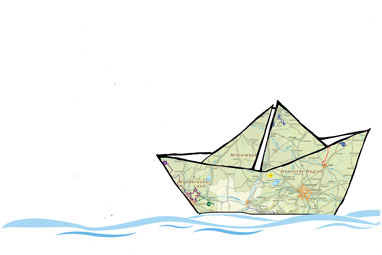 Look out over the sea beyond all the shallows, and your gaze comes to the horizon – but of course that is not the limit. For many people this year, the horizon has become a blurred line; the Summer Academy, too, is being held under special circumstances. Many teachers and students, unable to come to Salzburg, are participating from a distance. So we ask: what do I focus on at present, and how far does this go? What are my expectations for the future – and will I have to change them? Am I interested in the immediate, or rather in the more distant?

Seeking a position to adopt at present, we are developing a series of four podcasts to gain an idea of the ambience in this global summer, by holding live conversations, casting nets to gather thoughts, and asking for many personal opinions. Our vehicle is the ship, which has always served to bring people together and connect cultures, to discover new worlds and transport goods from here to there. We are starting an expedition over the seas, creating connections far beyond the horizon by building relation-ships. This opens the way for a very personal view from different angles, represented by many voices from diverse "harbours", with a telescope like a kaleidoscope envisioning its own route.

In cooperation with Radiofabrik, Verein Freier Rundfunk Salzburg at 107,5 and 97,3 MHz as well as online at radiofabrik.at

For twelve years now, exceptional productions pushing the spatial boundaries and formal restrictions of a conventional theatre have been presented under the label ohnetitel. Its characteristics include: a passionate interest in points of intersection between art and everyday life, with an instinct for "the stage" in public space; a dramatic language inspired by concepts and forms derived from the visual arts, dance, composition, literature and much more, thus operating on an interdisciplinary or non-disciplinary basis; exclusively "home-grown", each production in its own content-specific format. In its many productions and co-operations, ohnetitel always considers places and current events from scratch. In 2019, ohnetitel created for the "Sommerszene" a 24-part portrait of the town, entitled Eine Odyssee durch Salzburg. The most recent production is the audio installation ingeborg bachmann. die single with a 6-minute audio drama, record-player and zoetrope, designed for the Ingeborg Bachmann photo exhibition Rom, 1962 in the Salzburg Literaturhaus (March 2020). In 2012, ohnetitel was awarded the Prize for Cultural Work by the Province of Salzburg, and in 2018 the Cultural Fund Prize by the Town of Salzburg.

This was developed by Dorit Ehlers in 2018 as a dramatic artistic concept, with the continuing theme of Schiffssehnsucht [lit. "ship longing"] in various new ideas and public projects, consciously intermingling artistic formats and creative implementation resources. In 2018, Flaschenpostamt [postal bottle service] was shown in the Summer Academy co-teachers' exhibition Shifting Point(s), in co-operation with the project space periscope. Since then, an analogue bottle-message exchange has been in operation between people from towns with and without harbours. On her own website, she publishes a weekly blog, as Schiffssehnsucht researcher "Miss A. Ship".