Flaka Haliti together with Metahaven and Markus Miessen 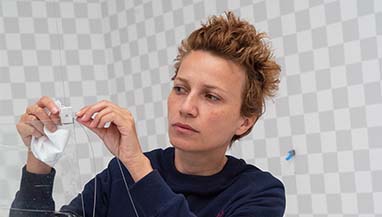 For her first solo exhibition in Austria, Munich-based artist Flaka Haliti has invited the design studio Metahaven and architect Markus Miessen to jointly create a social space for art, a Discourse Bar. In her drawings, photographs, sculptures and installations, Haliti explores a world of digital posthumanity. Haliti‘s artistic work can perhaps be described as a 'thinking of human life' that points beyond itself and yet does not shy away from conflict with its own materiality.

Flaka Haliti (born 1982 in Pristina, Kosovo, lives in Munich and Pristina) represented her home country Kosovo at the Venice Biennale in 2015. She was a scholarship-holder of the German Residency –Villa Romana in Florence in 2017 and is the recipient of the Ars Viva Prize from Der Kulturkreis der deutschen Wirtschaft im BDI, and Henkel Award from mumok - Museum of Modern Art Vienna. She completed her studies at the College of Fine Arts, Städelschule in Frankfurt am Main and presented her artistic work in individual exhibitions at the mumok - Museum Moderne Kunst in Vienna, S.A.L.T.S. Kunstverein Birsfelden, Kunsthalle Lingen, Kunstverein Friedrichshafen, and Kunsthaus Hamburg, as well as in group exhibitions at Museum Lenbachhaus Munich, Museum Ludwig Cologne, Kunsthalle Vienna and, Haus der Kulturen der Welt in Berlin, amongst others. She participated in the 6th Moscow Biennale 2015, in the Public Art Munich and Busan Biennale 2018. In 2019 she was a participant in the Fellbach Triennial, where she received the Ludwig Gies Prize from the Letter Stiftung. She was nominated for the Preis der Nationalgalerie in 2019 and exhibited at the Hamburger Bahnhof, Berlin. In 2021 she was part of Baltic Triennial, Autostrada Biennale, and designed a set for an opera commissioned by Kunsthaus Bregenz and Bregenz Festspiele. In 2022 she participated in Manifesta 14.

Metahaven's work consists of film-making, writing, textile art and design. Films by Metahaven include Chaos Theory(2021), Hometown (2018), and Information Skies (2016), nominated for the European Film Awards 2017. A forthcoming film is Capture (2022). Metahaven has participated in group exhibitions including at Artists Space, New York, the Museum of Modern Art, Warsaw, the Gwangju Biennale, Gwangju, the Busan Biennale, Busan, the Sharjah Biennial, Sharjah, and MHKA, Antwerp, and has held solo exhibitions including at MoMA PS1, New York, Yerba Buena Center for the Arts, San Francisco, Izolyatsia, Kyiv, ICA London, e-flux, New York, and State of Concept Athens. Their work is in collections including the Sharjah Art Foundation, the National Gallery of Victoria, MUHKA, and the Stedelijk Museum Amsterdam. Recent books include Digital Tarkovsky (2018).

Markus Miessen is an architect (www.studiomiessen.com), writer, and Professor of Urban Regeneration at the University of Luxembourg, where he holds the chair of the City of Esch (www.masterarchitecture.lu). He received his PhD from the Centre for Research Architecture at Goldsmiths, London, supervised by Eyal Weizman. His work revolves around questions of critical spatial practice, institution building and spatial politics. Miessen has previously taught at the Architectural Association (London), and has been a Harvard Fellow. Most recently, he has held a Stiftungsprofessur for Critical Spatial Practice at the Städelschule (Frankfurt), and was Distinguished Professor of Practice at the University of Southern California (Los Angeles). Amongst many other books and writings, Miessen is the author of The Nightmare of Participation and Crossbenching: Towards Participation as Critical Spatial Practice(both Sternberg Press and Merve Verlag, Berlin).