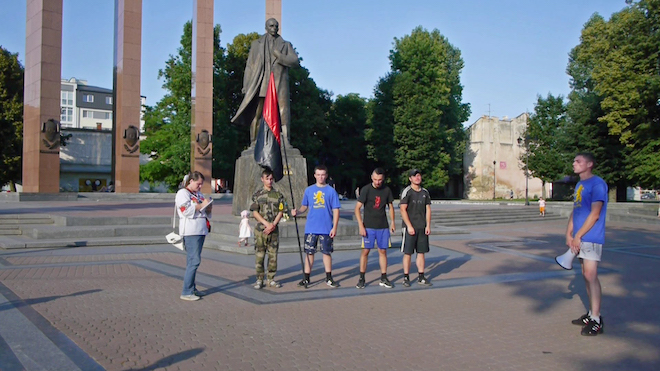 de-fac-to (HD video, 32 min, 2018, Ukrainian, Russian, and English with English subtitles) deals with the appropriation and reinterpretation of history within a post-factual society. Constructed similarly to a calendar, this work shows annual memorial rituals, events relating to World War II, celebrated by diverse political, social and ethnic groups. Attention is centred on the formal vocabulary and the performative character of the events. Despite the serious nature of the historical background, the overlapping of several semantic levels leads repeatedly to involuntary situational comic effects. The film illustrates the complexity of the coexistence of opposing lifeworlds in a post-Soviet town. By way of well-known historical circumstances, we are plunged into regional conflicts and conventions. The work, filmed in Lviv, is a collaboration between artist Ekaterina Shapiro-Obermair and historian Alexandra Wachter.

The film will be followed by a conversation between the artist and historian Albert Lichtblau.

Ekaterina Shapiro-Obermair, born in Moscow in 1980, has lived and worked in Vienna since 2004.