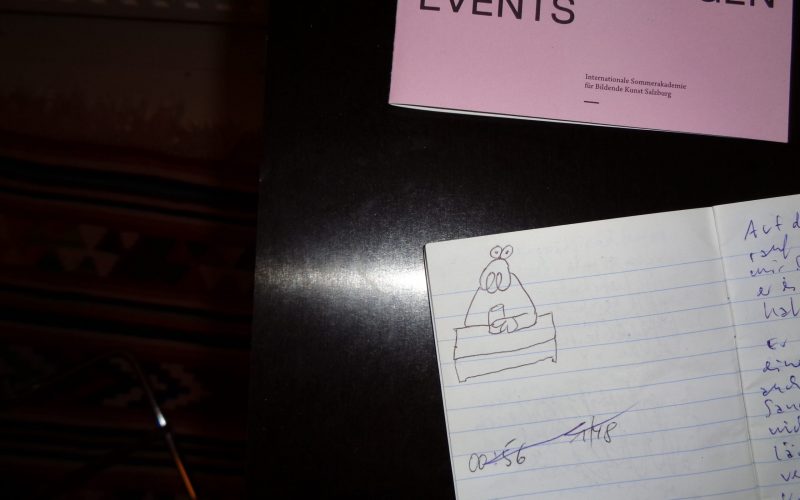 With the mouth full of sand

On the short drive up to the fortress, David Lynch tells me why he left art be, not quite, but at least his studies. In the fall of 1967, he decided not to continue his studies, and wrote a letter to the school management explaining his decision: “I won’t take up my studies anymore, but I’ll come by from time to time to drink a Coke. Unfortunately I don’t have enough money and my doctor says I am allergic to oil paint. I’ll get a stomach ulcer and tapeworms in addition to my stomach cramps. I no longer have the strength to continue my work at the art academy conscientiously. Best wishes, David. P.S. I’ll be making films instead.”

He then says this one irritating, iridescent phrase, “You don’t say I LOVE YOU with your mouth full of sand.” He smiles and I think I understand him.

We’d just been to the Anselm Kiefer exhibition at Thaddaeus Ropac’s gallery. The usual material battles of lead, sand, straw. Lynch says he understands the attitude, the deliberate heaviness, but the pathos lacks any trick, any mystery capable of separating pomp from kitsch, of liking the artist and the work. And he says that he once saw a Kiefer hanging in Stallone’s house, and that Sly told him that the work would dematerialize. Stallone paid $1.7 million for it! It had straw on it. Kiefer had glued the straw to the Kiefer. One day Stallone thought, “Shit, what’s that under the picture?“ Straw. A new straw every day. He called the dealer and said: “The Kiefer is shedding.“ Said the dealer: “Mr. Stallone, that’s how it has to be. The picture goes through a process of evolution. The picture lives.“ Stallone thought he was going crazy. $1.7 million! He would just put the straws back on. Every day there was a straw down, he put it there, glue, straw back up. A co-production of Anselm Kiefer and Sylvester Stallone.

And again Lynch says, smiling, the enigmatic sentence “You don’t say I LOVE YOU with your mouth full of sand.”

Art is a lover or a friend, but then there are also prostitutes, call boys, gallants, tap dancers, jugglers. You have to figure that out and recognize it, otherwise you can stop with art. I ask him whether he knows Erwin Wurm, also a Ropac artist, he says: Yes, he does know him, he knows what he does, a son of a policeman, who has the misfortune to always remain a son of a policeman. But he also says that Kiefer, Wurm, and Jackson Pollock are decorative art that misses the actual art, it’s art for people who basically hate art, loveless merchandise. If only these people had taken up a real profession, saddler, farrier or running a nail salon. The moment I wanted to ask him whether he thought that Günther Uecker, who nailed a Mozart for the Salzburg Festival 8 years ago, he called this work of art “Optical Score Mozart”, whether Uecker would have been better off opening a nail salon, the train reached the fortress, we got off and I messed up my own punch line. Maybe I have a mouth full of sand.