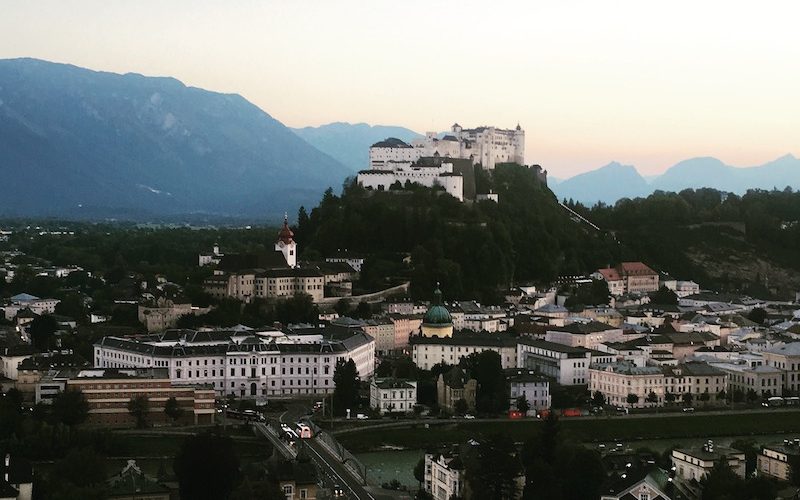 I’m never going to stop taking pictures of mountains. This photograph was taken from the top of Kapuzinerberg, which is on the other side of the river from the fortress. It’s 640 meters high and I must admit to almost giving up on reaching the peak yesterday, but I’m glad I kept going because the views were extraordinary and I felt pretty pleased with myself afterwards.

At the fortress all the buzz is about this evening’s performance from the Ei Arakawa and Christian Naujok class at Künstlerhaus Salzburg. Titled ‘Let Paintings Sing’, the course is about how music relates to art and how paintings can be “activated” through song. It’s based on Ei’s and Christian’s past collaborations (at Skulptur Projekte Münster and Kunstverein Dusseldorf), both of which featured digital translations of famous paintings combined with music or spoken word. Summer Academy students and staff were treated to a little preview yesterday when Christian and Ei gave a spontaneous afternoon performance, in which they sung and danced to a projected image of a painting.

Don’t forget to also visit the exhibition opening tonight at the Künstlerhaus by Carl Johan Högberg who I’ve written about before (in issue 24 of BE Magazine) and whose paintings I love because they’re full of riddles. The exhibition is called ‘She Who Speaks’ and is based on Högberg’s fascination with a French clairvoyant named Hélène Smith who claimed she could communicate with Martians and was hugely influential for the Surrealists. 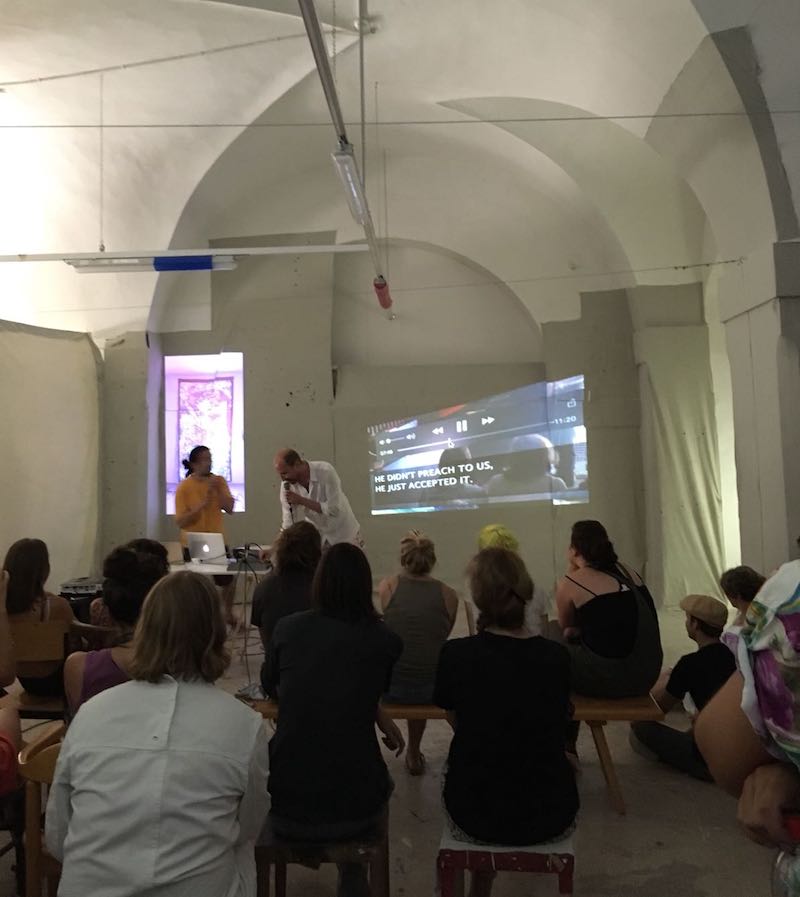 My plan is to go to try to go to different class every day this week, and so after lunch I joined Martin Herbert’s class for an afternoon of reading and discussion. He began the session by breaking down how he plans for longer articles, which involves creating a kind of patchwork quilt of notes that eventually becomes a more manageable two-page plan. Creating a plan, says Martin, is a way of freeing up the part of your brain that’s worried about where to go next. It also makes the writing process less improvisational and more like “finishing off” something you already started, taking away some of the mystery but also a lot of the anxiety.

Before any of that though, he first conducts an interview with the artist he’s writing about. Interviews are still something I find quite challenging, so I furiously tried to write down as much of his advice as possible:

After this we did a close reading of two examples of monographs (essays on a single artist’s work) from frieze. Firstly, a “unconventional, conventional” essay by Jenifer Higgie on Matthew Brannon; and secondly, a more experimental essay by Bruce Hainley that takes the form of a pop quiz. It’s difficult to distill an hour long discussion into a few sentences, but one point that really stood out for me was how writers can mask or cover a text’s fairly conventional framework with very simple tricks – such as starting with a recent work before going into an artist’s back catalogue – to avoid a boring opening (i.e. In 1978 John Smith…) for your chronological essay; thereby “hooking” the reader by first talking about something that is relevant to the present.