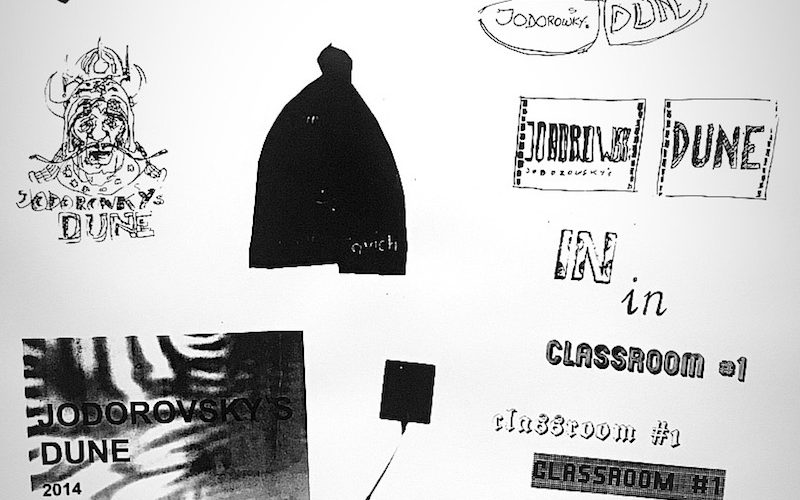 The Most Visionary Film Never Made

While I spent most of the day holed up in my room trying to make sense of the notes I wrote at last weekend’s “Global Academy II” in preparation for an article I have to turn in later in the week, I did manage to get up to the castle in the early evening for a special film screening of the documentary Jodorowsky’s Dune (2014). It was hosted by Ekatarina’s printing class, who made a screen printed poster for the event with one big twist: as the documentary was about a film that was never made they created the poster without watching Jodorowsky’s Dune first – this screening was the grand reveal.

Alejandro Jodorowsky is a Chilean-French filmmaker who became famous in the underground film circuit after his western El Topo became what is considered America’s first midnight-movie cult hit. (The practice of airing low budget films at midnight started in New York started in the early-1970s and then spread to other urban centres.) After this success he was given money to create another trippy, controversial and most definitely blasphemous movie titled The Holy Mountain (1973) before receiving a carte-blanche by French film producer Michel Seydoux to direct a film-adaptation of the 1965 sci-fi novel Dune, written by Frank Herbert.

Jodorowsky’s interpretation of Dune was simply too crazy for Hollywood and was eventually abandoned, but it lives on in the 2014 documentary, which got rave reviews on the festival circuit. It comprises interviews made with Jodorowsky, along with others who worked on the film with him and film critics who admire Jodorowsky and who give us the film historical context we need to appreciate how truly groundbreaking this movie could have been. I highly recommend watching the documentary so I don’t want to give to much away, but what I would say is that it’s an important lesson for artists because Jodorowsky knows that to make something great you have to be unafraid of failure. As he says near the end of the film: “Dune is in the world like a dream and dreams change the world.”