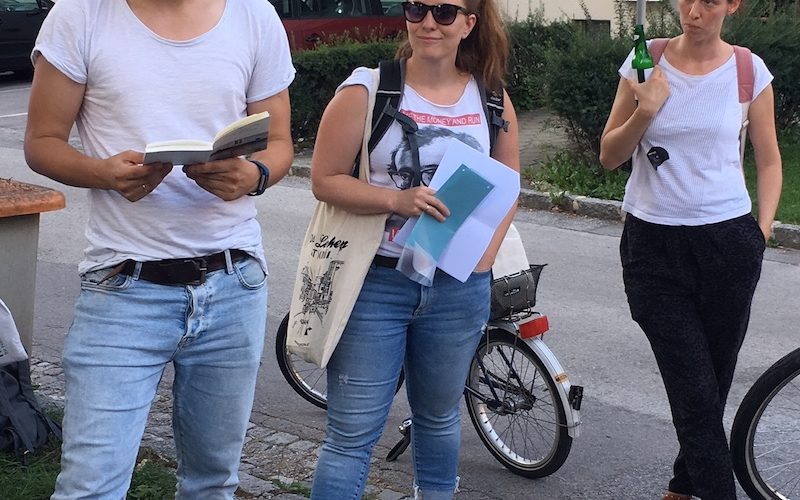 The burnt orange facade of Jazz It – Salzburg’s premier live jazz venue – hides a secret. Or does it? If you’re paying close attention it might be possible to guess the building’s other inhabitants by reading a plaque fixed to the wall: “DIE ARBEITER,” it reads, “SIND EINE MACHT WENN SIE GEMEINSAM KÄMPFEN SIND SIE UNBESIEGBAR – KARL MARX” (The workers are a power if they fight together they are unbeatable). It turns out that the other occupants of this building on Elisabethstraße are Salzburg’s communist party. As their membership got smaller over the years they needed less and less space and that’s when Jazz It came into existence.

This was just one of many facts I learnt on ‘The Salzburg Alternative’, a city tour organised by the founders of Fräulein Flora  – an online city guide of Salzburg for young people by young people. Eva Krallinger-Gruber and Matthias Gruber, both Salzburg natives, were inspired to start Fräulein Flora in order to counter the idea that Salzburg is “Klein, Katholisch, Konservative” (small, catholic and conservative). They started with a city map featuring cool places to visit to help people avoid the usual tourist-traps and from there they moved on to creating a blog and then a print magazine called Qwant (Salzburg slang for cool).

Not knowing the website before, I thought that the tour might be focused on lifestyle: where are the best places to get cocktails, beer & breakfast? But instead we were taken on a walk through two areas, Lehen and Elisabeth-Vorstadt, which tourists don’t often get to see. As I’ve written about before, Lehen is known to Salzburgers as one of the city’s worst neighbourhoods. Eva and Matthias said that to hear other people talk about it you would assume there was a double homicide every night. It’s not true of course – Lehen and Elisabeth–Vorstadt are both nice places to live with cheap(er) rent, which our two guides proved by taking us to cultural hotspots in each district.

We started at the Trummeri, where we got to test one of the craft beers they sell while our guides showed us what they called the “real centre of Salzburg”. The reason they say this is because 15,000 people live in Lehen, compared to the less than 50 people who are actually registered in the historic old town. From there we moved on to the site of the old stadium for FC Red Bull Salzburg, who in the 1990s once made it to the Uefa Cup (Matthias: “It was a dream!”) The space is now empty and sits in front of the Salzburg public library – a strange, sci fi-looking building with a panorama bar and coffee shop sitting on top of it. Along with the thousands of books and magazines you can access for free, they also do a very special kind of therapy there: once a week children who are struggling with their reading can go to read out-loud to a dog!

After this stop off we crossed the bridge and went over to Elisabeth–Vorstadt, where our hosts live. When the area was built in the 1900s people assumed that it was going to become a very expensive area because it was next to the train station – this never happened, but now it’s possible to get beautiful apartments with high ceilings (unlike in the rest of Salzburg, which was built much earlier) for a relatively good price. A few stop offs later (did you know that Thomas Bernhard lived in Salzburg for a year?), we ended at Salzburg’s only memorial to World War II. As our guides explained, it took almost 50 years for this sculpture to be decided upon and even then it was unceremoniously dumped behind the train station, hidden by trees and public bike racks. As Austria (along with the rest of Europe) seems to be moving  further to the right everyday it was a sad to see how the government of Salzburg chooses to remember its dark past. 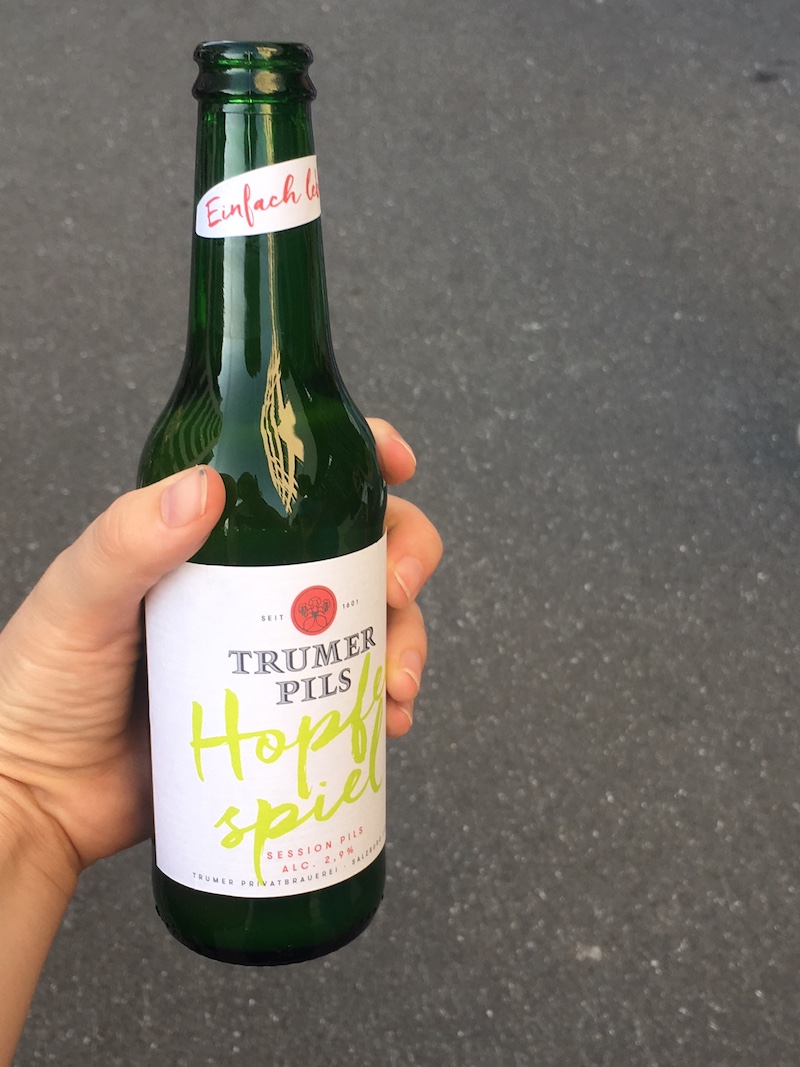 Any tour that starts with free beer is a good tour 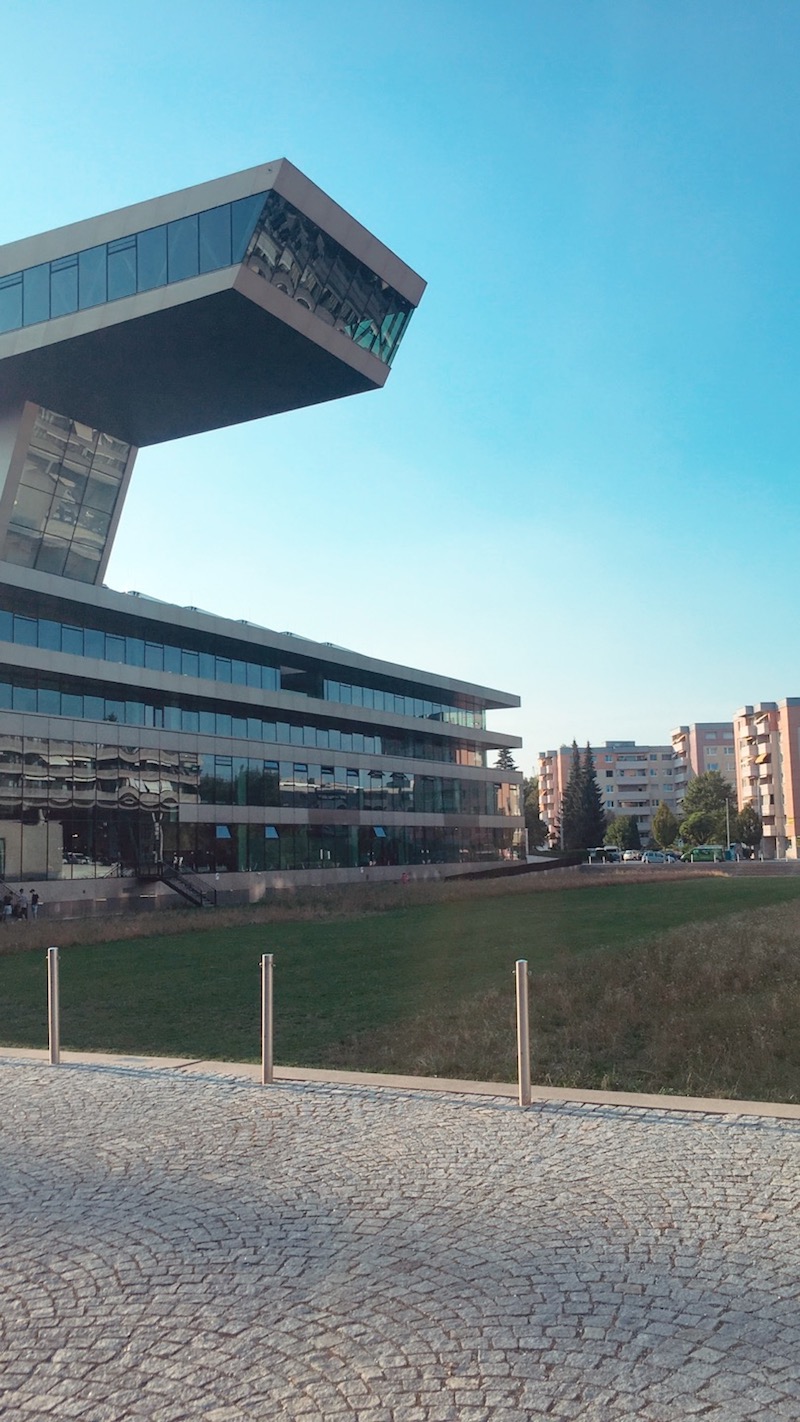