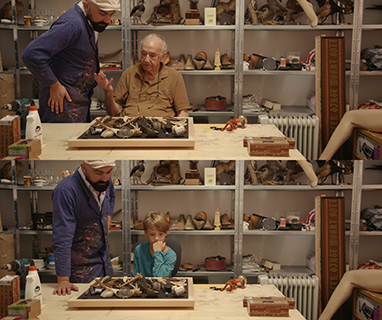 a film by Anja Salomonowitz with introductory words by the director

Daniel Spoerri arranges things into one of his assemblages as if he were contributing something to the order of life. Oskar Salomonowitz, the filmmaker's son, vividly brings the artist's thoughts closer to us, as if they were his own. The spoons of the late father of Anja Salomonowitz are added to the cycle of life. People die, things remain. By also updating Daniel Spoerri's past through the child, the film courageously undertakes a new documentary path of cinematic, biographical representation. Spoerri's father, Isaac Feinstein, was murdered in the Holocaust and Spoerri's life was shaped by this disappearance. In his work, he says, the things found at the flea market, which he collects and nails to the wall as compositions, no longer disappear. He has captured life for a moment.