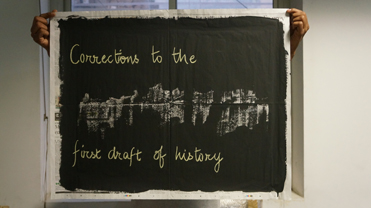 Raqs Media Collective, Corrections to the
First Draft of History
, 2014

In his keynote lecture Shuddhabrata Sengupta discusses the notion of the planetary as an emergent figure of thought in twenty-first century culture and addresses various questions that might interest the Global Academy from the multi-faceted view of an artist, curator and writer.

See his keynote lecture on our YouTube channel here.

Raqs has exhibited widely at exhibitions such as documenta, Kassel (DE) and the Venice (IT), Istanbul (TR), Taipei, Liverpool (GB), Shanghai (CN), Sydney (AU) and São Paulo (BR) Biennials. They have had many solo exhibitions in museums, and educational and independent art spaces around the world. Their most recent exhibition is currently on show at the Kunstsammlung Nordrhein Westfalia/K21 Museum in Düsseldorf (DE). They have been invited to teach in many institutions and self-organized initiatives. Sengupta was the (2015/16) Keith Haring Fellow in Art and Activism with the Center for Curatorial Studies (Hessel Museum of Art) and the Human Rights Program at Bard College, Annandale on Hudson, both New York, NY (US).