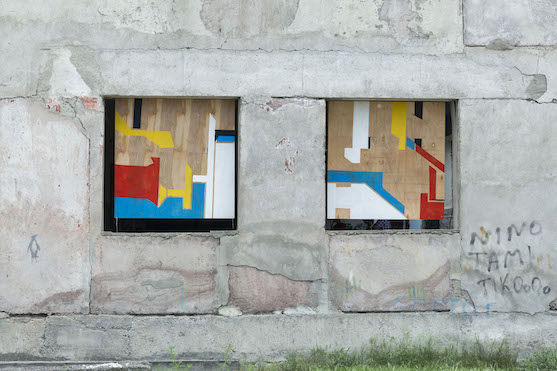 Located on the edge of Roman, Byzantine, Ottoman, Russian, Soviet and now European geo-cultural unities, Georgia has been viewed as a peripheral part of “Western” world vision. Being peripheral can be pejorative, but it also can allow for freedom of initiation. How much is this freedom of initiation preserved in contemporary Georgian visual culture?

Niko Pirosmani, a naïve Georgian painter from the turn of the 20th century, has been the face of Georgian art until today. His paintings include traditional images of feasts with portraits of Georgians enjoying food and wine around the traditional supra. Bassiani is a techno club founded in Tbilisi in 2013: “the new Berghain,” it is a favourite place for contemporary Georgians to unwind and entertain. Similarly, a number of experimental clubs have been set up in different locations throughout Tbilisi – in an apartment within a historical building, under a Soviet-era bridge or in an old fish restaurant on the river. These places are metaphors for how today’s Tbilisi has redefined its concept of entertainment and culture. Irena Popiashvili examines these recent establishments as a way of retracing the story of recent cultural developments in the visual arts in contemporary Georgia: its educational settings (such as the new art school, VA[A]DS), Kunsthalle Tbilisi, the newly founded Tbilisi Art Fair, and non-traditional galleries (including Window Project and Patara Gallery).

Irena Popiashvili is dean and founder of Visual Arts, Architecture & Design School, VA[A]DS, at the Free University of Tbilisi. She also established the contemporary art space Kunsthalle Tbilisi. She has curated exhibitions in the US and Europe.