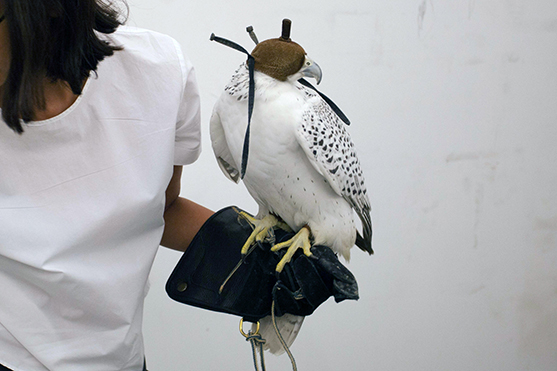 The discovery of oil changed the landscape of the Arabian Gulf. It changed the texture of what would become its city-states, as well as the demographics of the people who would occupy them. It ordained a new age of petromateriality influenced as much by the substance’s viscosity as by the new materials it created. This emphasis on petroleum-derived products left its mark on the region’s burgeoning contemporary art scene, most notably the early Emirati conceptualists. The prominence of oil receded but the pursuit of plastic remained. Everything accelerated, the UAE announced its Mars Mission and the aesthetic scaffolding of Gulf Futurism was overwritten by a fleshier, more militarised present, and contemporary artists responded in kind.

Today, if you want to navigate the globe you probably pass through an airport like Dubai. Maybe your own city increasingly feels like Dubai. A tessellation of free ports and starchitected paeans to finance capital; a bifurcation between citizens and temporary workers; a post-Westernness driven by market and expedience much more than by ideological sympathies. But the only way to navigate the  planetary is through water: via temperature and humidity, through rising sea levels and drought. Because after peak oil comes peak plastic, and it is not far off. The world changed the Gulf, but not as much as the Gulf is changing the planet.

Rahel Aima is a writer, editor, and critic currently based in Brooklyn, NY (US). She was the founding editor of THE STATE, and is a 2018 recipient of the Arts Writers Grant. She is currently at work on a book about colour and futurity, and a collection of exhibition fiction set in Dubai.