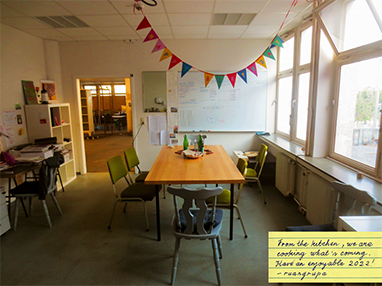 Requirements
Laptop/tablet with camera and microphone, personal working materials, willingness to collaborate and engage in a collective platform, to share ideas and knowledge.

‘Harvest’ is the term for collective work results: thinking, sharing, and creating together. ruangrupa approaches harvest as a method to reflect art as social practice or as a common good. Art serves community well-being in the longer term through shared resources and mutual care. Curatorial processes are organised through shared values, collective rituals, and organisational principles. In 2021, the course started from the direction of ‘Lumbung‘, which is understood as a metaphorical space for an alternative economy based on such values as collectivity, sharing, trust, playfulness, and anchoring the global locally.

In this course, students approach 'harvest' as a practice of reflecting and rethinking documenta fifteen (the harvest of collective work since 2019) in Kassel. The class departs from self-organisation, conversation, and assembly to delve into the activities in Kassel together with the curators. Through collective experience in situ, the students reflect on the value of solidarity and sustainability in community-based art-making and curatorial cultures. In this light, they will reflect on their ideas for or practices of collective organisation, be it a form of artistic practice or, more broadly, engaging in culture and politics. Furthermore, students learn new ways of exhibition-making as a practice of sharing generosity and empathy in times of ongoing conflict.


ruangrupa is a Jakarta-based collective established in 2000. It has been selected as artistic director of documenta fifteen in Kassel (DE), in 2022. It is a non-profit organisation that strives to support the idea of art within urban and cultural contexts by involving artists and other disciplines such as social sciences, politics, technology, media, etc, to give critical observation and views towards Indonesian urban contemporary issues. ruangrupa also produces collaborative works in the form of art projects, such as exhibitions, festivals, art labs, workshops, research, as well as books, magazines and online journal publications.

In 2018, learning from their experience establishing Gudang Sarinah Ekosistem together with Serrum and Grafis Huru Hara, ruangrupa co-initiated GUDSKUL: contemporary art collective and ecosystem studies. It is a public learning space established to practise an expanded understanding of collective values, such as equality, sharing, solidarity, friendship and togetherness.

Ayşe Güleç was born in 1964 in Ankara. As a child she came to Germany with her parents, who moved there as guest workers. In 1986 she began her studies in Kassel, where she remained. Ayşe Güleç is an educationalist and activist researcher, who works at the interface of art, art mediation, anti-racism, migration, and community based building and education.

From 1998 to 2016, Güleç worked at the sociocultural center Kulturzentrum Schlachthof, where she was responsible for migration as well as local, regional, and European cultural networking. For documenta 12 in 2007, she developed the Advisory Board, subsequently becoming the group’s spokesperson. In 2012 she was part of the dOCUMENTA (13) Maybe Education Group and prepared art mediators for the exhibition. From 2016 to 2017, she was Head of Community Liaison for documenta 14, creating connections between artists and sociopolitical contexts, and coordinated The Society of Friends of Halit as part of the Parliament of Bodies for the exhibition and public programs. From 2018 to 2019, she worked for the Museum für Moderne Kunst in Frankfurt am Main as Head of the Education Department.

Ayşe Güleç is also part of the Kassel-base Initiative 6. April, and is active in different anti-racist movements.