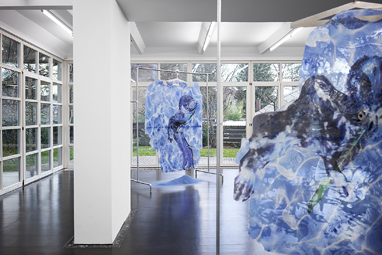 Watchu expect me to do when I lose my cool?, 2020, installation view. Photo: Ulrich Gebert (courtesy the artist and Deborah Schamoni)

Flaka Haliti in conversation with Markus Miessen on the nebulous politics of constructed identities, ambiguity, and the notion of detour as resistance.

Flaka Haliti’s artistic practice includes mixed media, sculpture, and spatial installation with a decidedly site-specific approach. Appropriation and rearrangement are continuous lines in her works, whereby new aesthetic patterns are created. Haliti emphasizes altered perceptions on a visual level as well as in conceptual methods, to engage in political reflection and geopolitical preoccupations. Mediated by the sensory and by visual fields, territorial boundaries and powers – such as national borders or the dispositions of associations like the UN or the European Union – are brought to negotiation. Importantly, her works steadily confront the languages of identity-construction in order to transcend its categorisations of gender or nationality while introducing detour as a game-plan of resistance. Occupying in-between states, Haliti furthermore challenges humanist perspectives and authority, over-representation and abstraction – not only on a visual level, but also in a conceptual approach through political strategies. Her practice operates as a dialogue between the notions of abrogation and appropriation – the one rejecting the standard and demands of systematic order, and the other making an adaptation of it. The result is the opening of a field for counter-poetics as an ongoing "in-betweenness" inside a dialectical performative space.

Markus Miessen is an architect (www.studiomiessen.com), writer, and Professor of Urban Regeneration at the University of Luxembourg, where he holds the chair of the City of Esch (www.masterarchitecture.lu). He received his PhD from the Centre for Research Architecture at Goldsmiths, London, supervised by Eyal Weizman. His work revolves around questions of critical spatial practice, institution building and spatial politics. Miessen has previously taught at the Architectural Association (London), and has been a Harvard Fellow. Most recently, he has held a Stiftungsprofessur for Critical Spatial Practice at the Städelschule (Frankfurt), and was Distinguished Professor of Practice at the University of Southern California (Los Angeles). Amongst many other books and writings, Miessen is the author of The Nightmare of Participation and Crossbenching: Towards Participation as Critical Spatial Practice(both Sternberg Press and Merve Verlag, Berlin).