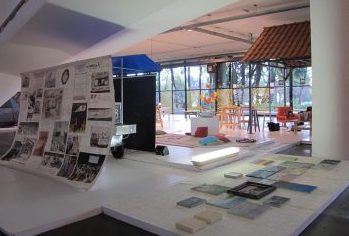 Artistic Directors of documenta fifteen, ruangrupa, and documenta 14, Adam Szymczyk, discuss ways under which “mega exhibitions” can provide collective benefit.
Moderated by Dr. Nora Sternfeld. In English language, documentation via YouTube: https://youtu.be/_xjhv9eyeyE
Adam Szymczyk is a curator and writer based in Basel and Zurich. He is Curator-at-Large at the Stedelijk Museum in Amsterdam. He is a member of the board of the Museum of Modern Art in Warsaw, a member of Scientific Committee of MUDAM Luxembourg, and a member of the advisory committee of the Kontakt Art Collection in Vienna, where he also taught seminars on the Principle of Equality (2019/2020) and Undoing Landscape (2020/2021) at the Akademie der bildenden Künste. He was Artistic Director of documenta 14 in Athens and Kassel between 2014 and 2017, and served as Director and Chief Curator at Kunsthalle Basel between 2003 and 2014. With Wieslaw Borowski, Joanna Mytkowska and Andrzej Przywara he co-founded the Foksal Gallery Foundation in Warsaw in 1997. In 2008 he co-curated, with Elena Filipovic, the 5th berlin biennial for contemporary art. In 2011, he was a recipient of the Walter Hopps Award for Curatorial Achievement at the Menil Foundation in Houston. Most recently, he curated the exhibitions Yannis Tsarouchis: Dancing in Real Life at Wrightwood 659 in Chicago (with Androniki Gripari) and Wilhelm Sasnal: Such a Landscape at The Museum of History of Polish Jews POLIN in Warsaw.

ruangrupa is a Jakarta-based collective established in 2000. Most recently, it has been selected as artistic director of documenta fifteen in Kassel (DE), in 2022. It is a non-profit organisation that strives to support the idea of art within urban and cultural contexts by involving artists and other disciplines such as social sciences, politics, technology, media, etc, to give critical observation and views towards Indonesian urban contemporary issues. ruangrupa also produces collaborative works in the form of art projects, such as exhibitions, festivals, art labs, workshops, research, as well as books, magazines and online journal publications. In 2018, learning from their experience establishing Gudang Sarinah Ekosistem together with Serrum and Grafis Huru Hara, ruangrupa co-initiated GUDSKUL: contemporary art collective and ecosystem studies. It is a public learning space established to practise an expanded understanding of collective values, such as equality, sharing, solidarity, friendship and togetherness. As an artists’ collective, ruangrupa has been involved in many collaborative and exchange projects, including participating in major exhibitions such as Gwangju Biennale (2002 & 2018), Istanbul Biennial (2005), Asia Pacific Triennial of Contemporary Art (Brisbane, 2012), Singapore Biennale (2011), São Paulo Biennial (2014), Aichi Triennale (Nagoya, 2016) and Cosmopolis at Centre Pompidou (Paris, 2017). In 2016, ruangrupa curated TRANSaction: Sonsbeek 2016 in Arnhem (NL).

Nora Sternfeld is an art educator and curator. She is professor for art education at the HFBK Hamburg. From 2018 to 2020 she was documenta professor at the Kunsthochschule Kassel. From 2012 to 2018 she was Professor of Curating and Mediating Art at Aalto University in Helsinki. In addition, she is co-director of the /ecm - Master Program for Exhibition Theory and Practice at the University of Applied Arts Vienna, in the core team of schnittpunkt. austellungstheorie & praxis, co-founder and part of trafo.K, Office for Art, Education, and Critical Knowledge Production (Vienna) and since 2011 part of freethought, Platform for Research, Education and Production (London). In this context she was also one of the artistic directors of the Bergen Assembly 2016 and is since 2020 BAK Fellow, basis voor actuele kunst (Utrecht). She publishes on contemporary art, educational theory, exhibitions, politics of history and anti-racism.