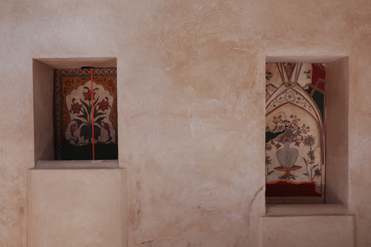 More beautiful for having been broken,
installation view, 2018, gouache and digital print on paper

Aisha Khalid’s art practice is rooted in her rigorous training as a miniature painter at the National College of Arts (NCA) in Lahore (PK). Like others who graduated from this department in the early 1990s, Khalid was eager to not only master the ancient technique but, even more so, keen to develop her own personal language. Naturally, this meant breaking away from a set of rules that incorporated endless hours of sitting in front of small, hand-made painting surfaces onto which she unremittingly copied old masters. Early on in her career, Aisha Khalid developed a very strong personal visual language. Based on simple geometric designs, she created intimate spaces in which she came to articulate the female body and its relationship to public and private spaces. The female figure became more and more interwoven with the spatial design until it ultimately completely disappeared. By systematically reducing the former figurative formal language, Khalid came to focus on ever more complex geometric patterns derived from abstract ornamentation. The whirly dynamics inherent in these mesmerizing works incorporate an entirely new world of thought based on abstraction that can be achieved only by an artist of a certain maturity.

Aisha Khalid, born in Faisalabad (PK) in 1972, lives and works in Lahore (PK). She is one of Pakistan’s leading contemporary artists, curators and art teachers. She graduated from the National College of Arts, Lahore, and is a post-graduate of the Rijksakademie van beeldende Kunsten, Amsterdam. Khalid is part of the so-called Neo-Miniature movement’s first generation. The trend, which started in Lahore around 1990, “rehabilitates” the traditional miniature painting technique from the Moghul Empire, giving it new life by mixing it with other media and updating it to reflect a more contemporary aesthetic. She was a finalist and people’s choice winner of the 2011 Jameel Prize, and was also awarded the 2012 Alice Award and the 2010 Birgit Skiold Memorial Trust Award of Excellence.

Solo exhibitions
2017 Two Wings to Fly, Not One (with Imran Qureshi), Pakistan National Council for the Arts, Islamabad. I am and I am not, Zilberman Gallery, Berlin. 2016 Two Worlds as One, Statens Museum for Kunst, Copenhagen. 2014 When I am silent, Pao Galleries, Hong Kong Art Center, Hong Kong (CN). 2013 The Divine is in the detail, IVDE Gallery, Dubai (AE). 2012 Larger Than Life, Whitworth Art Gallery, Manchester (UK). 2010 Pattern to Follow, Chowkandi Gallery, Karachi (PK). 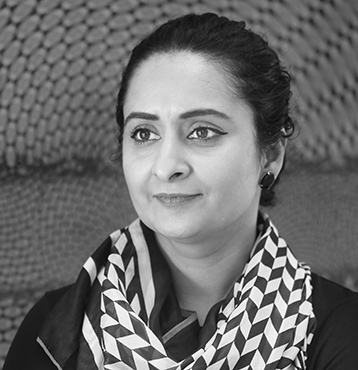 Portrait photo: At if Saeed and Kamran Saleem