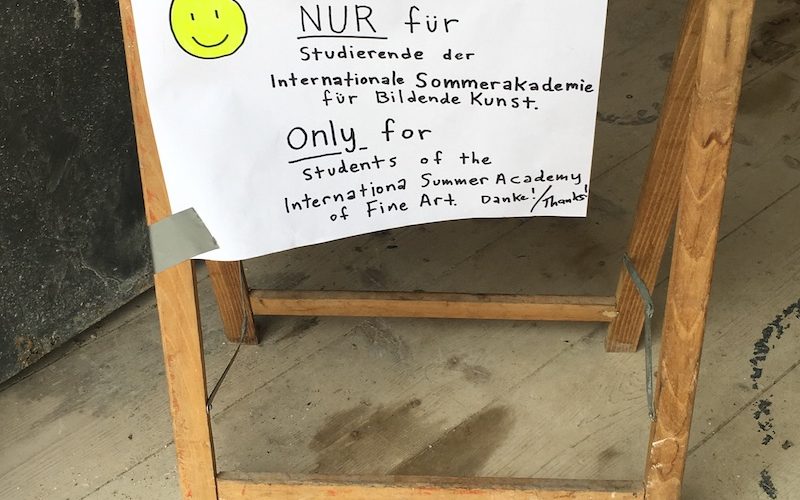 It’s almost a week and a half into the first round of classes at the Summer Academy, and I’ve been thinking a lot about influences. I’ve watched students in classes introduce themselves through a single image, read essays out-loud by the people who have inspired them and stream influential artist lectures for their fellow students. I’ve also been regularly going to 5020 and listening to the Academy’s programme of artist talks. As an art critic, I’m always interested in placing the artists I’m writing about in a historical context; one of my favourite art books is E.H Gombrich’s The Story of Art, first published in 1950 by Phaidon, which traces the creation of art as a continuous narrative from cave paintings to abstract expressionism. Each movement is seen as a reaction to (and sometimes a retaliation against) the previous one.

In Ei Arakawa’s artist talk he showed a video of a Japanese collective (whose name I unfortunately didn’t catch) who made performative paintings and sculptures in public spaces in the ’50s, and the impression this discovery must have had on a young Ei was immediately clear. He also showed us pictures and played us sound clips from his most recent exhibition at Kunstverein Düsseldorf (together with Christian Naujoks), where he is currently showing a collection of ‘paintings’ based on the astrological birth charts of various pieces of historical performance art. An astrological birth chart is a map of where all the planets were in their journey around the sun at the exact moment of your birth. By creating one for each performance Ei developed a fictional ‘personality’, which he then used to create a sound piece that plays from an LED painting of the birth chart itself. There is a clear sense though his choices of performances that he’s balanced the theatrical with the non theatrical; the musical with the visual and the serious with the humorous, but it’s also possible to see that these choices are personal and based on their relevance to his own practice.

One of the works which he created a personality profile for was Yoko Ono’s Cut Piece. Performed for the first time in 1964, in Cut Piece Ono sat on stage and the audience were invited to take turns approaching the Japanese artist in order to cut off her clothing. It was a pioneering piece of participatory art (in which the audience become ‘agents’ of the work), and I bring it up because – like Ei – I’ve found it incredibly influential to both my writing and performance work. For me, the work is most powerful because it questions power structures between performer and audience – who is actually in charge of the situation is never completely clear. Cut Piece encouraged me to play with the power I have any time I stand in front of a group of people and read my work.