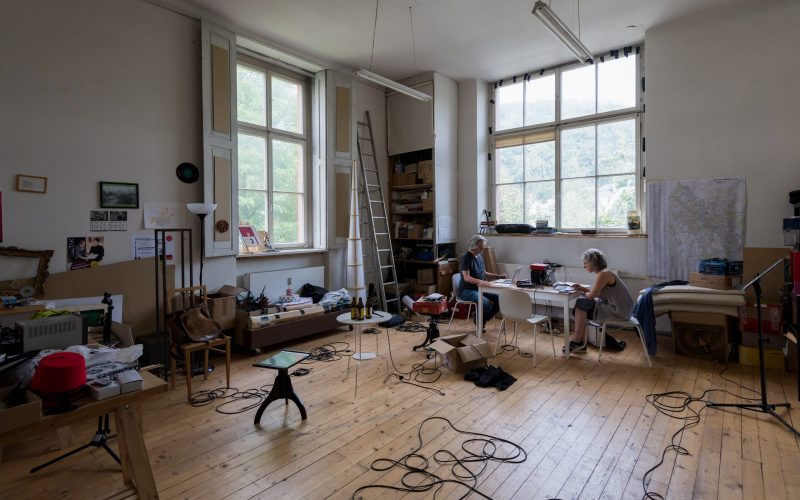 Half way along the virtual ship travel over the connecting ocean …

This year’s summer academy is special: not everybody on board is in Salzburg. Many teachers and participants have stayed at home, joining the academy programme from their country.

This was the starting point for our idea to develop a podcast that would involve everybody and create a pool for all the different voices … whether in or off Salzburg.

We started by talking to Priya Sen, Bani Abidi and Marina Fokidis via Skype – crossing the ocean to New Delhi, Berlin and Athens.

They willingly came along the proposed theme and told us their personal views and associations about harbour, ships, horizon, the sea and more. And also how they perceived the current situation, let’s call it ‚crisis‘, or in ship terms: the vessel in distress.

We’ve continued our talks on the fortress, asking the ones live on board to speak with us for a short moment about their actual ship feeling: how do they perceive this special journey and what is their travel route? Also: which message would they like to throw into the ocean and the world?

Two more voices give the frame throughout all the episodes:

Stephen Mathewson (technical director summer) is the voice of the private traveler, the one who observes the different situations, the weather, the sea. We introduced this character in order to create a narrative line – the calm voice of somebody presumably writing into his log book.

Dorit Ehlers (actress and co-creator of the podcast) reads extracts of »The first word over the ocean« by Stefan Zweig. Why did we choose this literary bridge?

Stefan Zweig himself was a convinced cosmopolitan, but had to leave from Salzburg by force in 1934. He landed in Brasil, on the other side of the ocean, never recovering from the brutal circumstances and the distress that made him put an end to his life: he had lost faith in a new horizon …

»The First Word Across the Ocean« by Stefan Zweig

The text is part of his collection Decisive Moments in History (Sternstunden der Menschheit, 1927): Here he describes the enterprise of establishing a first electromagnetic communication across the oceans, by a transatlantic telegraph cable. It is a story about enthousiasm and failure and never giving up. It is also a story of creating a globally connected world, bringing the nations together and causing the »greatest change in space and time since the creation oft the world« (quote by St. Zweig, own translation).

This revolution had already started with the invention of the telegraph by Samuel Morse in 1837.  Today the »Morse Alphabet« that made the transmission of messages possible has survived only at sea. We generally know it for the S.O.S. signal.

The year 2020 is a year that has placed us all in an emergency situation. But we are not alone. And we can still talk to each other. So here we are, all on our personal voyage, but in community. Let’s continue the exchange, we all need new horizons.

Or as Nadira Husain chose as title of her course:  What makes a world? – A horizon.