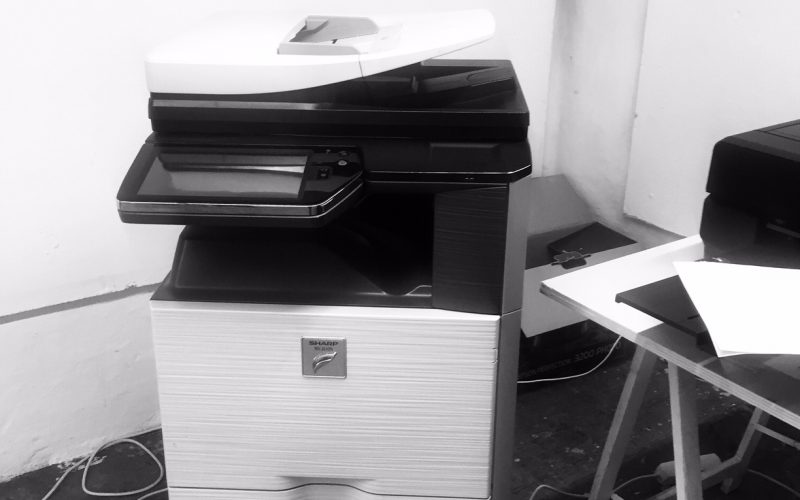 Since making Kranky Klaus (2002-2003) at the Salzburger Kunstverein, everyone keeps asking Cameron Jamie when his next movie is coming out.

But among other trades, Jamie is known for making clay cool again, despite the material being phased out in the art world as “craftwork” in the eighties. Actually, Jamie comes from the drawing board, photography, and ceramics. He sticks to art mediums like ink, gouaches, and a copy machine. This dialectic of inside to outside preoccupies him in multiple mediums. Masks face away from their audience, like animals in the zoo. Automatic drawings take shape as monotypes. He almost took a hammer to his project on ceramic masks before realizing their insides were more exciting than their exteriors. Art is a means to contain energy through a mechanical process such as a Xerox or kiln. He believes in productive mistakes. It seems a natural progression that his layered drawings have morphed into glazed ceramic towers. However, he refuses to share his tricks, preferring to keep an aura of mystique and not adhering to conventional notions of beauty.

At the Summer Academy, Jamie is teaching artist book technologies, using the printer as a tool. The copy machine is a paintbrush. In the classroom, two copy machines are to be used with reckless abandon. The copy machine is a loaded signifier, linking to zine history and subculture but Jamie feels they are being exploited, “I just like to refer to them as books. It’s just a way to simplify. I generally don’t like to make those classifications. If my students want to call them zines, they call them zines. If that is the terminology they want to use. To me, a zine is a kind of cliché right now for a lot of things. Zines are hip. I like to separate myself from others. I don’t have a herd mentality. When I was making them, I just referred to them as Xerox books. Zines have some weird kind of collective way of thinking about the material.”

How big is an edition in the class?  Just one unique master copy edition is being produced. Some are making multiple individual books. The students will produce at least one to three finished Xerox artist books. The edition size has not yet been determined. With these master printing stats, they are equipped to print larger editions once the course ends if not start their own publishing house. “They are going to have several books ready to go that they can just take to their photocopy shop and bang out an edition.”
The photocopier gives the student’s the direction where the work should go. Rather than trying to find their work in the material, the material dictates the work. “When things seem wrong, that’s the door they should go down. There is no wrong way to go”, is Jamie’s attitude. To Cameron Jamie, a book is a book. He does not make generalizations.

Here, is a sneak peek on the three movies, Cameron Jamie has curated for the Sunset Kino at the Salzburger Kunstverein this Wednesday, August 14th.  Cameron Jamie’s intention was to show obscure films. All three films deal with costumes, fantasy, and fairytales. In a way, you might find parallels to Kranky Klaus.

“I wanted to show films on artists that may not be so familiar to people. People know Fischli and Weiss but they do not know their very first film The Point of Least Resistance, 1981. They dress up in these cheap animal costumes as a rat and a panda-bear and go to Hollywood. I thought it was funny as someone born in Hollywood to show a movie in an alpine context about to alpine artists who go to Hollywood.
I thought a lot about the animator, Martha Colburn’s work like Evil Dracula, 1997. People should see Martha’s work more. Marnie Weber works a lot with her mythology and fairytales in Songs that Never Die, 2005. She’s sort of created her universe. Telling her own Brother’s Grimm stories. In Marnie’s case, they are connected to European folktales but filtered through rock bands and ghosts. So I guess what ties all three of these artists together is the fact, each builds their mythological tale. Martha uses animation and sound. Fischli and Weiss and Marnie are more narrative-based. They are scary and funny at the same time. I am interested in that too. It’s been a part of my work for the last thirty years.”